Home | Too Young to Worry About Skin Cancer? No Such Thing

Too Young to Worry About Skin Cancer? No Such Thing 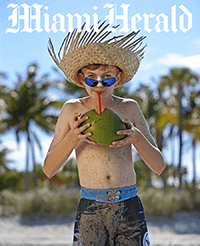 BY KATHRYN W. FOSTER
Special to the Miami Herald

Krysta Zangle of Coconut Grove grew up in the sun, sailing since she was 7, going to the beach and now working for the U.S. Coast Guard.

She didn’t pay much attention to a spot on her cheek.

“It was clear, a little bit raised and tender,” Zangle said. About two years later, at the urging of her mother, she saw a doctor.

“Sure enough, it was basal cell carcinoma. Coincidentally, I ended up going in a month before my wedding,” said Zangle, then 24. “I had exactly one month to recover to be ready for pictures.”

Her doctor, Dr. Alysa Herman, a dermatologist and Mohs surgeon at South Miami Hospital, said, “When I started training, I never ever had a patient my own age. Now I have six patients 25 and younger. When you realize that half of all Americans who live to age 65 will have a skin cancer at least once, you realize that skin cancer is an epidemic.”

While melanoma gets the press because it causes about 10,000 deaths a year, basal cell, with about 3.5 million new cases yearly, is by far the most common skin cancer, Herman said.

Added Dr. Robert Kirsner , chairman of the Department of Dermatology & Cutaneous Surgery at the University of Miami Miller School of Medicine, “There are more basal cell carcinomas than all other cancers combined.”

If you live in Florida, you have to be sun smart no matter what your age.

“Just one blistering sunburn in childhood will more than double your lifetime risk [as will] five sunburns throughout your lifetime,” said Dr. Ana Margarita Duarte, director of Pediatric Dermatology at Nicklaus Children’s Hospital, formerly Miami Children’s. “You get 25 percent of your lifetime sun exposure in childhood.”

Duarte recommends having children choose the sunscreen they like, as long as it has at least a 30 SPF rating. “Find a sunscreen you’re happy with and make it a daily routine,” she said.

All three dermatologists said to avoid peak sun hours, wear wide-brimmed hats when working outside and use sunscreen daily.

Even if you’re just driving to work, “put it on your face, neck and top of your hands. The sun penetrates the windshield. Every time you walk out of the door, you get sun exposure,” Herman said, adding that 90 percent of aging in skin is from sun damage.

Ultraviolet radiation used in tanning booths is a known carcinogen. In 2014, the FDA reclassified tanning booths as a Class 2 carcinogen, meaning they pose a moderate to high cancer risk and must carry a warning label similar to the one on cigarettes, Herman said. Eleven states bar anyone younger than 18. In Florida, children must have parental permission.

“If you want an alternative, use artificial” tanning creams or sprays. Duarte said.

“Taking aspirin may also have a beneficial effect,” Kirsner said, as might other nonsteroidal analgesics such as ibuprofen and naproxen.

“It’s possible if you have skin cancer and hypertension, it’s beneficial to take a certain type of blood pressure medication” – the ACE inhibitors and the ARBs, or angiotensin II receptor blockers, Kirsner said.

Coffee, ARBs and ACEs are basal cell inhibitors, Kirsner said. As for the pain relievers, Krisner said they “inhibit the COX enzyme present in skin cancer.”

“Every individual should do monthly evaluations on themselves,” said Duarte, the pediatric dermatologist. “If there is a mole that’s bleeding, changing or painful or if it’s a wart that’s not acting normally,” see your doctor.

For adults, Herman said, “if you notice a bump that’s changing whether in size, or color or itching … a growth that’s not healing, if it’s still around after two to three weeks, call your doctor.”

Early detection is key. A basal cell carcinoma allowed to grow can be disfiguring. An undetected melanoma can be deadly, yet the five-year survival rate for melanomas detected before the tumor has spread to the surrounding lymph nodes is 98 percent.

“Whether you’re fair or dark, African American, Hispanic or Caucasian, get it checked by your dermatologist,” Duarte said.

Basal cell carcinoma: The most common type, with 3.5 million new cases annually in the United States.

Squamous cell carcinoma: The second most common type, with about 700,000 new cases a year.