Home | Nearly Half a Million Dollars Raised for Miami Hospital

Nearly Half a Million Dollars Raised for Miami Hospital 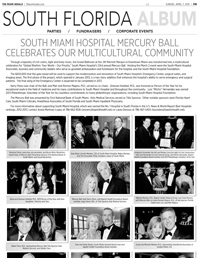 Through a tapestry of rich colors, light and lively music, the Grand Ballroom at the JW Marriott Marquis in Downtown Miami was transformed into a multicultural celebration for “Global Rhythm: Your World – Our Priority,” South Miami Hospital’s 53rd annual Mercury Ball. Hosting the March 2 event were the South Miami Hospital Associates, business and community leaders who serve as goodwill ambassadors and fundraisers for the hospital, and the South Miami Hospital Foundation.

The $450,000 that the gala raised will be used to support the modernization and renovation of South Miami Hospital’s Emergency Center, surgical suites, and imaging areas. The fi rst phase of the project, which opened in January 2013, is a two-story addition that enhances the hospital’s ability to serve emergency and surgical patients. The fi nal wing of the Emergency Center is expected to be completed in 2013.

Kerry Perez was chair of the Ball, and Mari and Romeo Majano, M.D., served as co-chairs. Ghassan Haddad, M.D., was honored as Person of the Year for his exceptional work in the fi eld of medicine and his many contributions to South Miami Hospital and throughout the community. Luis “Wicho” Hernandez was named 2013 Philanthropic Volunteer of the Year for his countless commitments to many philanthropic organizations, including South Miami Hospital Foundation.

For more information about supporting South Miami Hospital, which was named the No. 1 Hospital in South Florida in the U.S. News & World Report Best Hospitals rankings, 2012-2013, contact Annie Martinez-Lopez at 786-662-8126 (annam@baptisthealth.net) or Laura Denoux at 786-467-5404 (lauraden@baptisthealth.net).